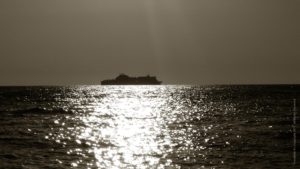 A ship cruising the Ionian Sea

We are two cousins hailing from the town of Filiatra in Messinia, Greece. It is only reasonable that we come from a farming family, as the economy of the region is based on agriculture. While we have shared the local cultural experiences of growing up in our small rural community, we had our own distinctive paths in life: from leaving behind a life in the USA and becoming a Graphic Designer in Athens, to studying Physical Education and working as a salesman in Athens. The financial crisis and the recession of the Greek economy, ignited partly an internal search reflecting upon our lives. It was imperative to trace our roots and look for answers in the values professed by the older generations. And where else to start from than back home: The region of Messinia!

As kids, during the warm summer days, our parents used to send us to our grandparent’s country house at the olive groves estate. Those were some of the most fun experiences as it was an opportunity for us to see our cousins, play and explore the wilderness! The old country house lacked electricity, so at nights, we would gather around grandmas’ old lantern that illuminated the living room and eagerly awaited our grandfather to start telling us his stories from the past. It was something like the old storytelling circles that our ancient predecessors would form around a hearth and listen to the bard who would sing the epic deeds of Odysseas and other heroes. Those stories, at the end of the day were our favorite. And they had various themes. Sometimes they were funny, others serious, scary, or even sad. But they all had a piece of wisdom in them. They all were stories delivered from generation to generation, going back to the early days of our civilization.

In older times, according to our grandparents, our family and most of the population of the region lived in the mountains and the surrounding slopes of our area. Their main occupation was livestock farming, as it was the only way to make a living because of the high altitude. Besides, they were used to living in the mountains since the times they were hiding from the Turkish invaders. Over the years, the land was liberated and the need arose to descend to the small and fertile plain stretching West to the sea and start cultivating the fertile land again. We are already the fourth generation who grows these same olive trees that gave birth to our grandparents and raised us.

As you set out for Ithaka hope the journey is a long one, full of adventure, full of discovery.
-“Ithaca” by C.P. Cavafy, 1911

Thus started an interesting journey into our rich Greek cultural and historical past. With respect to the past, we research and analyze the best practices accumulated from the previous generations and try to apply this knowledge in a modern and ethical way. Emphasis is given in safeguarding a relationship of mutual respect between humans and nature, within a process of sustainable and environmental friendly, rural development. Inspired by this, we decided to create “Paradosie” (pronounced Paráðosi, from the Greek word Παράδοση, meaning Tradition). Paradosie is an on going effort, where we revive forgotten folkloric wisdom, modernize it and build upon a legacy. Since our families are olive oil producers, we started by focusing our first project to Paradosie, Extra Virgin Olive Oil.

The journey has started. It’s a continuation process, it’s Life… Paradosie  – A Greek family legacy of cultivating the olive tree.